Reflections on Thich Nhat Hanh, and The Woman Who Introduced Him to American Law Enforcement 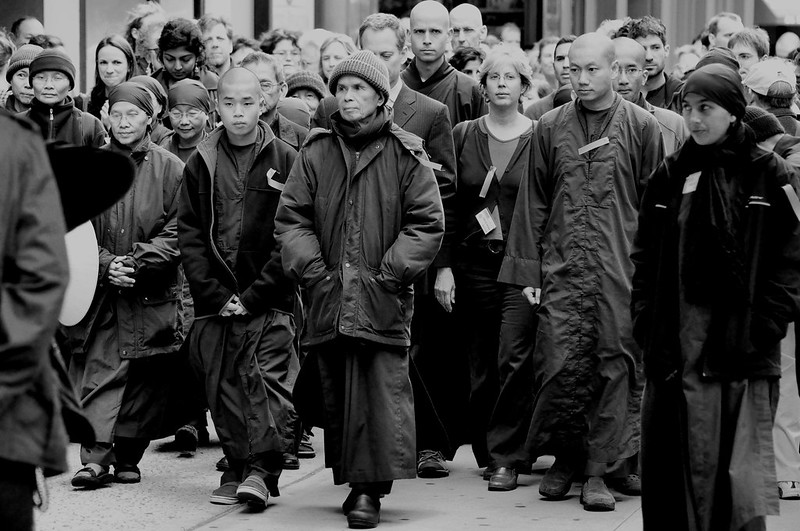 When Thich Nhat Hanh died early this year, I, like so many, was saddened. Even though he had been withdrawing from public life for several years, he continued to inspire legions—and not simply through his words, though he had authored dozens of books and given countless talks; it was primarily his steadfast embodiment of the wisdom and power of those words, especially as he grew old so gracefully before our eyes. We knew he would die, and we were all the more struck when it finally happened.

You might know of his work to bring peace to the people of Vietnam during that terrible war; of his commendation by Martin Luther King Jr. for the Nobel Peace Prize in 1967; of his exile to France. But did you know that Thay—as he was affectionately called—had actually trained American law enforcement? Or that he was familiar with the statistics of law enforcement officer line-of-duty deaths and suicides, and he cared greatly about these things?
Why would a world-famous Zen master care deeply about cops?

The simple reason is that Thay had dedicated his life to reducing suffering among sentient beings, cops included. Another reason is Cheri Maples, a former Madison (Wisc.) police officer.

The story goes like this: Sgt. Maples had read books by Thay, and, after injuring her back on duty, she saw in her chiropractor’s office that he was hosting a retreat in nearby Mundelein, Ill. On a whim, she went. This was 1991. “It kind of changed my life,” she told radio host Krista Tippett.

One of the reasons I felt compelled to write a book on mindfulness and meditation was because those addressing these topics weren’t particularly welcoming to first responders, especially law enforcement. Maples said of that first retreat: “I came very armored and defended. I was really ready for people to hate me because I was a police officer. That happens a lot. … People see the uniform and make a decision about who I was.”

Maples nearly refrained from attending the mindfulness trainings because she felt the potential for violence in her work precluded her. But Sister Chan Khong, the senior monastic administering the event, implored her to reconsider: “Who else would we want to carry a gun except someone who would do it mindfully? Of course you can take these trainings.”

Maples stuck with the training, becoming a teacher in the Order of Interbeing. In 2003, she organized a well-publicized and pathbreaking retreat for law enforcement with Thay presiding. The idea was to speak specifically to the suffering of those officers, share the wisdom of mindfulness, and thereby spread seeds of compassion in the communities the officers serve.

“You are taught about what can go wrong, not so much about what can go right,” Maples said of police work. She described a “numbing of the heart” from years on patrol, imploring her audience to open or soften their hearts: “What I started to see was what was right in front of me: a suffering human being who often didn’t have any other place to turn to.”

I say in my book that the job of all first responders is to reduce suffering in the real world. This can get confused in our world of rampant loneliness, addiction, and self-aggrandizement. Reducing suffering isn’t synonymous with saving the day or the world, or getting the most likes on social media (or even so much as a thank-you). Reducing suffering doesn’t feel like “crushing it.” In order to skillfully reduce suffering in the real world, one must remain compassionate, fully-present, and resolute.

“If you can live in the present moment, there are all kinds of wonders to nourish and refresh yourself with,” Maples said.

Cheri Maples, Thich Nhat Hanh, and Sister Chan Khong appeal to the profound goodness first responders—particularly law enforcement officers—can do, by speaking as well to their particular suffering. In fact, I sought out Maples as I was beginning on my book, but she had been in a bicycle accident and was in the hospital. Maples passed away about five years ago, having laid the groundwork, I believe, to bring the gifts of mindfulness to those most apt to spread them far and wide.

“Life is filled with suffering, but it is also filled with many wonders, such as the blue sky, the sunshine, and the eyes of a baby. To suffer is not enough. We must also be in touch with the wonders of life. They are within us and all around us, everywhere, anytime.” (Thich Nhat Hanh, Being Peace, 1987)

May peace be with you!